To give you a taste of the atmosphere, listen to the concert’s three encores.

Hallelujah
Lyrics and music by Leonard Cohen, arrangement by Roger Emerson, addition of trio of cellos by Louis Babin.

Twelve Days of Christmas
Arrangement by John Rutter, addition of trio of cellos by Louis Babin

Read a most enthusiastic review by journalist Dyan Bouthillette for L’Information du Nord – Sainte-Agathe (in French):

“With the help of a pianist and three cellists, the forty choir members moved the crowd with their powerful, yet soft, delivery. It seemed as though angels were singing.” 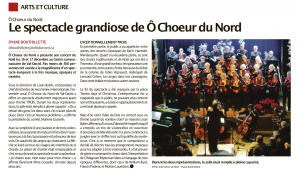