L’Orchestre symphonique de l’Estuaire (OSE) has issued a press release announcing the world premiere of my most recent composition, entitled L’Indécis (The Undecided). The concert will take place at Salle Desjardins-Telus in Rimouski this coming November 2.

I composed this concerto for trumpets and one soloist for trumpeter Frédéric Demers. Mr. Demers will be performing as an invited soloist under the direction of OSE conductor Luc Chaput. I would like to express my thanks to Mr. Chaput for including this work on the evening’s program.

L’Indécis is a unique work in that the soloist uses six different trumpets. The title of the piece points to the difficult choices the performer must make in choosing amongst the six. Having been a trumpeter for a good part of my career, I drew on my own experience in imagining this performer constantly pulled in different musical directions by his instruments.

The evening’s program (in French) and complete program notes (in English) explaining the inspiration and underlying concept of L’Indécis.

Here is an extract from the program notes:

“The Trumpeter has all the symptoms of multiple-personality disorder. It’s a known phenomenon affecting most trumpeters: he plays different instruments and each one highlights a separate aspect of his personality and sensibility. But he does not know who he really is. So he decides to consult a psychologist!”

Yesterday night (April 2nd), a new page of history was written in the world of ice skating at the Studio La Majeure in Montreal!

The Canadian pair skater Eric Radford, the 2013 World bronze medalist with current partner Meagan Duhamel, was at the string recording session listening to the music to be used for their upcoming short program in this olympic year.

His own music composition!

To my knowledge, never before a skater has composed his own music track for a top level ice skating competition. TSN sensed the potential of this event. The specialized sports channel prepares a documentary to be broadcasted by Fall 2013 in order to expose the creation work of Eric off the ice rink. TSN’s producer Tracy Britnell did an interview with Eric, together with myself, just minutes prior to the recording session to find out more about the creative process of the music production.

The studio’s control room was packed. Close friends of the two skaters were present.

Julie Marcotte, their choregrapher, was making sure the musical format would be complying with the restrictions imposed by the International Skating Union (ISU).

Two shooting crews were in place to capture this rare moment. On top of TSN, CBC also sent people to the studio. Exciting mood.

The players are part of the Orchestre symphonique de Longueuil. A big thanks to the musicians and to Michel Viau, Artistic and Production Manager.

Eric got in touch with me in August 2012 to work on the orchestration and the song’s structure. A structure in evolution as time went by in order to adapt to some technical and artistic shapes. The music will be use in Meagan and Eric’s  short program at the Olympics.

I extend my sincere thanks to Sylvain Lefebvre and his team at Studio La Majeure.

Since a couple of weeks, Radio-classique in Montréal and in Québec City are broadcasting the two first movements of my work for string orchestra : Suite du promeneur.

These excerpts are taken from the album Dimensions.

(This article was published by the Canadian Music Educator, Volume 54 – Number 3 – Spring 2013)

Last summer I had the opportunity to live an experience that brought together the joy of meeting new people with the thrill of creation. I had the luck – and the challenge – to direct a group of young musicians in the preparation and presentation of one of my musical compositions.  These youth are aged 15 to 25 and hail from several European countries, as well as from both North and South America. Although they were from a variety of cultures and separated by language barriers, they shared a genuine love of music and their chosen instruments. It all took place at the Eurochestries Festival held in Charente-Maritime in France[1]. This extraordinary event brought together orchestras and ensembles from Russia, Spain, Turkey, Brazil, Canada (Quebec) and France[2].

Cultural exchange and the pressure to perform

I am well acquainted with the practise in schools, choirs and amateur orchestras of welcoming visiting musical counterparts from other countries or cities. Everyone involved makes a big effort to make the most of these cultural exchanges. I have also participated at music camps, an experience that allowed me to play with musicians from different regions of our country. Such exchanges are exciting and enriching, both for budding musicians and the professionals who work with them. They become a source of invaluable experience, unforgettable memories and personal pride.

The Eurochestries concept invites a mix of cultural exchange that creates a true music festival – complete with the pressure to perform that is integral in to such an event. The festival I was part of last summer was particularly intense. More than 40 concerts were presented by various ensembles at venues across the large region of Charente-Maritime in south-west France (home of cognac and Pineau). Participants are provided with room and board, and transportation to venues at the Festival’s expense; travel costs to and from the event are the musicians’ only non-musical responsibility.

Creating a work with a youth orchestra

There was also my role as composer in residence. The theme of this year’s festival was “Saint-Exupéry: Hommage autour de son œuvre”.  In keeping with this theme, festival president Mr. Claude Révolte instructed me to arrive with a symphonic work that would be a musical illustration of the writer’s ideas and images. The piece I created in response to this challenge is called  “Saint-Exupéry : de cœur, de sable et d’étoiles”. It is available on the Internet[3].

But my reflections here are mainly about the work and musical perception of young musicians merging their talents and efforts in the performance of a musical creation they have never come across before. Young performers are no different than members of the general public: they are naturally apprehensive of the unknown. And contrary to what one encounters with the preparation of Massenet, Mussorgsky, Strauss and other composers deeply rooted in the collective memory, it is always more difficult to propose a new work. The harmonic, melodic, and even the rhythmic vocabularies can be daunting for many young performers.  My creative experiences working with young musicians in schools[4] served me well at the Eurochestries Festival. Following are a few observations:

Honesty in the work

It seems to me that honesty is the essential quality we are looking for in human interactions. This also applies to proposed compositions.  Regardless of the aesthetic, honesty has to be transmitted from the work to the ones performing it.

We must also help young artists understand the importance of the creative act in which they are taking part. As performers, they are an essential part of it, and not only to the communication of the new piece; they also have an impact on certain elements of the creative process.  Those proposing new works – composers, teachers, conductors – must impart a sense of commitment and a love of new experiences. The goal is to redefine the boundaries of traditional repertory through the pleasure of discovery.

A creator should be restrained when confronting the reaction of young musicians during the first performance of a new work. We all know how sometimes young people do not mince words – they are capable of pointed comments that can be hurtful. Often this is a justified reaction while in the process of experiencing a musical situation they are unused to, a situation that will push them beyond their comfort zone. Don’t be offended; take it in stride. I’ve seen the opinions of many young musicians be transformed into a deep and enthusiastic attachment to a music which initially drew negative reactions.

Rehearsal time is precious. This is true for professionals and tenured professors alike.  Little time is available to explain motivations shaping the piece when they were being worked out. The mechanics of composition and observations concerning melodic structures, harmonics and rhythms are put aside due to lack of time. But young performers would benefit from an introduction to this information. It might help them gain a better understanding of the musical reality and thus feel more engaged. This can be accomplished in the form of a brief explanatory document which young musicians can refer to.

The power of today’s music

We must never under-estimate the reach of contemporary music across the broad musical landscape. There is a visceral attachment linking our musical psyche to our daily environment. How many times have I witnessed audience members fascinated by a sound effect incorporated into a piece! Of course we want a music that can be rapidly grasped; but there is something to be gained from incorporating modern techniques. Music composed to images is often more avant-garde than pieces young musicians attempt in concert. This is because contemporary music is often a natural support for the image, as we know from the way images in a film transport a viewer as he absorbs a non-conventional music.

An education advocating respect for other cultures and the peoples comprising them points toward the opening of the spirit. It is important that young musicians be able to confront their fear of the unknown by acquiring tools that allow them to decode what may at first seem indecipherable. I believe that today’s music offers an opportunity to put into practice mechanisms enabling youth to shape their understanding of the world by immersing them in fragmented musical universes.

Which brings me back to the experience I had last summer. Not only was there the creation of a musical work, but the particular linguistic context of the Eurochestries setting added another level of challenge.  And just as my composition slowly but surely won over their hearts, so were deep friendships forged as the festival progressed – friendships that go beyond language, cultures and yes, even music!

[2] National Youth Symphony Orchestra of Turkey, under the direction of M. Orhun Orhon

A «classical» music album’s life spans is long. And it is why the critics are also picking up along.

Here is the most recent critic about the album Dimensions on which two of my string orchestra pieces can be heard : Couleurs and Suite du promeneur. 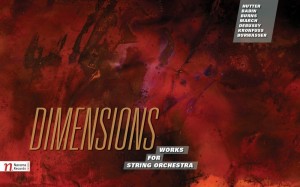